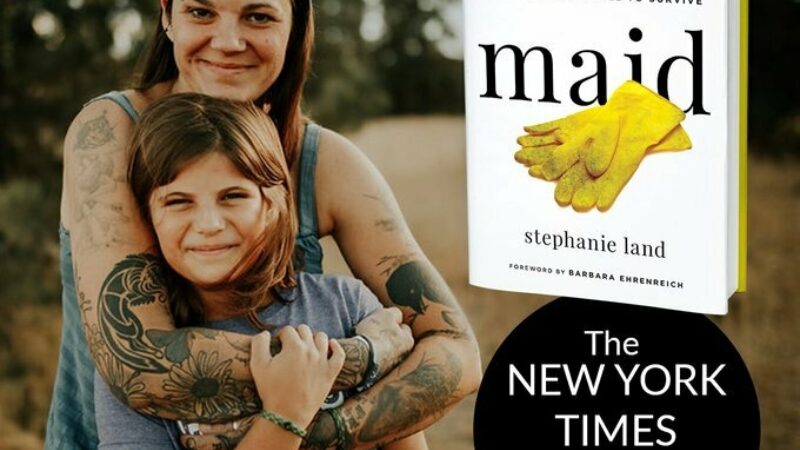 In honor of the countless women authors writing of their own experiences, accomplishments, and challenges as women as well as sharing those of others, we have read and reviewed the 2019 memoir “Maid: Hard Work, Low Pay, and a Mother’s Will to Survive” by Stephanie Land.

Raised in a middle-class household, Land spent many years surviving below the poverty line as a single mother and domestic cleaner while eventually earning her bachelor’s degree. Land describes the incredible amount of intimacy that comes with seeing people’s homes and messes but how rarely she was ever acknowledged by the people whose homes were being cleaned.

Land also writes about the time and energy it took to fill out paperwork proving she qualified for government assistance, alongside the exhausting work of cleaning houses, raising a kid, and going to school. It serves as a poignant example of how mind-numbing poverty can be. A standout line from the book quotes Land saying, “I was overwhelmed by how much work it took to prove I was poor.”

Throughout the book, Land also requires the reader to directly confront the human impacts of stereotyping people in poverty and the bias against government social programs from judgmental grocery store shoppers, government employees, doctors, and so-called “friends”- those judgments and actions negatively shaping Land and her daughters’ life.

Overall Maid is an incredible read. Be sure to pick up a copy of from your local bookstore or library.

Additionally, Maid will premiere October 1 on Netflix as a mini-series starring Margaret Qualley, Andie MacDowell and Nick Robinson. The television series is “inspired by” and as such changing some locations and adding characters, but Land herself approved of the TV shows approach. The creator of the show Molly Smith Metzler also worked on Shameless, an Emmy award wining show similarly about the struggles of a family in poverty.

The following list are books, podcast episodes and a movie that came at the recommendation of Helena-based book store, Montana Book Company. While we have not personally read or watched all of the following, they come highly recommended and provide more material if you want to continue reading books like “Maid.” As always, check your local bookstore to see if they stock or can order these titles!

“Domestic Workers of the World Unite!” Is a non-fiction book written by sociologist Jennifer N. Fish, a professor at Old Dominion University. Backed by over a decade of Fish’s original research the book “takes us to Geneva, where domestic workers organized, negotiated, and successfully received the first-ever granting of international standards for care work protections by the United Nations’ International Labour Organization. This landmark victory not only legitimizes the importance of these household laborers’ demands for respect and recognition, but also signals the need to consider human rights as a central component of workers’ rights.”

“Essential,” an episode produced by This American Life in August of this year, details how the pandemic changed the job market and how essential work and workers were defined.

“Evicted: Poverty and Profit the American City", a non-fiction book written by Princeton sociology professor Matthew Desmond, won the 2016 Pulitzer Prize and was on the New York Times Book Review top 10 List that same year. “Evicted” follows eight families in Milwaukee, Wisconsin, as they try to keep themselves housed. In an excerpt from the novel, Desmond follows mom, Arleen, and her two sons, Jori and Jafaris, the day they are evicted from their home, “The day Arleen and her boys had to be out was cold. But if she waited any longer, the landlord would summon the sheriff, who would arrive with a gun, a team of boot-footed movers, and a folded judge’s order saying that her house was no longer hers. She would be given two options: truck or curb. “Truck” would mean that her things would be loaded into an eighteen-footer and later checked into bonded storage. She could get everything back after paying $350. Arleen didn’t have $350, so she would have opted for “curb,” which would mean watch­ing the movers pile everything onto the sidewalk”. “Evicted” highlights the difficulty of getting and keeping housing while living in poverty.

This episode from NPR is part of their “Throughline” podcast series that explores U.S. and global history and how it influences our shared realities today. In this episode hosts, Ramtin Arablouei and Rund Abdelfatah, interview author, Isabel Wilkerson, writer of “The Warmth of Other Suns,” which covered the great migration of African Americans from the South into all other parts of the U.S. up until the 1960’s. Through her research for the book, Wilkerson describes the structure of the former American South slavery as a caste system, a discovery which she discusses with the hosts, and how that caste system affects the U.S socially today.

“Nomadland: Surviving America in the 21st Century” is a non-fiction book by journalist, Jessica Bruder, who covered the sociological phenomenon of older, often retired Americans who began traveling around the United States in search of seasonal work following the 2007 Great Recession. The book follows Linda May as she moves from job to job and the tension that exists between the resilience of these people and the suffering they endure while working long, dangerous hours in jobs that frequently exploit them. “Nomadland” was turned into a film by the same name and directed by Asian-American female director, Chloe Zhao, who was the first Asian-American woman and second woman ever to win an Academy Award for Best Director. The film also won an award for Best Picture and lead actress, Frances McDormand, won Best Actress.

Nora McInery is the author of the 2016 memoir “It’s Okay to Laugh (Crying is Cool Too)” and the 2019 books “No Happy Endings” and Hot Young Windows Club. Much of her work focuses on grief and loss having herself endured a miscarriage, and the loss of her husband and father to cancer in 2014. McInery also discusses the complexities of human emotions in her podcast titled “Terrible Thanks for Asking.” In one episode, “When You Care for a Living, Who Cares for You,” McInerny interviews Ai-jen Poo of the National Domestic Workers Alliance (NWDA) and a domestic worker, named Jonny, about the network of domestic workers who connect our families, friends, homes and communities through their labor.

This nonfiction book, “The Maid’s Daughter,” was published in 2012 and won the 2012 Americo Paredes Book Award Winner for Non-Fiction presented by the Center for Mexican American Studies at South Texas College. It was also selected as a 2012 Outstanding Title by AAUP University Press Books for Public and Secondary School Libraries for telling a compelling story about the daughter of a domestic worker. The story follows Olivia who lives with her mother Carmen, “the live-in maid to a wealthy family. Mother and daughter sleep in the maid’s room, just off the kitchen. Olivia is raised alongside the other children of the family. She goes to school with them, eats meals with them, and is taken shopping for clothes with them. She is like a member of the family, except she is not.” The book is a wonderful read, full of complex narrative on domestic work, race, and identity.

“Sunstorm” is a podcast produced by the National Domestic Workers Alliance (NDWA) and hosted by national organizers, Alicia Garza and Ai-jen Poo. Alicia Garza is the co-creator for the Black Lives Matter Global Network, special projects director at the NDWA and principal at Black Futures Lab. She also hosts her own podcast “Lady Don’t Take No.” Ai-jen Poo is the co-founder and executive director of NDWA and the founder and director of Caring Across Generations. She authored the book “The Age of Dignity: Preparing for the Elder Boom in a Changing America” and was named a MacArthur “Genius” Awardee in 2014. Their well-known podcast is currently on it’s third season and interviews successful activists and journalists on how “women stay powerful and joyful amidst the chaos of life in America today.”

“The Making of a Teenage Service Class” by Ranita Ray, an Associate Professor of Sociology at the University of New Mexico who wrote about risky behaviors in teenagers such as drug use, violence, and teen pregnancy. “Ray recounts the three years she spent with sixteen poor Black and Brown youth, documenting their struggles to balance school and work while keeping commitments to family, friends, and lovers. Hunger, homelessness, untreated illnesses, and long hours spent traveling between work, school and home disrupted their dreams of upward mobility. While families, schools, nonprofit organizations, academics and policy makers stress risk behaviors in their efforts to end the cycle of poverty, Ray argues that this strategy reinforces class and racial hierarchies and diverts resources that could better support marginalized youth’s efforts to reach their educational and occupational goals.”

"Roma” is a black and white 2018 film, written and directed by Alfonso Cuaron. It won the Golden Lion, it received ten nominations at the Academy Awards, and was the first Mexican film entry to win Best Foreign Language Film, as well as winning Best Cinematography and Best Director. Star of the film, Yalitza Aparicio, became the first Indigenous Mexican women nominated for Best Actress at the Oscars. Set in 1970-71 the film follows the life of a live-in housekeeper as she navigates an unexpected pregnancy and works for and supports the matriarch of her employers, Sofia, as she navigates marital problems and her husband’s infidelity.

The film is semi-autobiographical based, in part, on Cuaron’s upbringing. “Roma is available to stream on Netflix.”

Finally, we recommend the memoir “Without a Net” by Michelle Kennedy, who was raised in a middle-class household in Vermont. “She attended college, interned in the U.S. Senate, married her high school sweetheart and settled in the suburbs of D.C. But the comfortable life she was building quickly fell apart. At age twenty-four Michelle was suddenly single, homeless, and living out of a car with her three small children. She waitressed night shifts while her kids slept out in the diner’s parking lot. She saved her tips in the glove compartment and set aside a few quarters every week for truck stop showers for her and the kids.” Kennedy details the experience of intense poverty waitressing and trying to keep her children fed, clothed and safe.