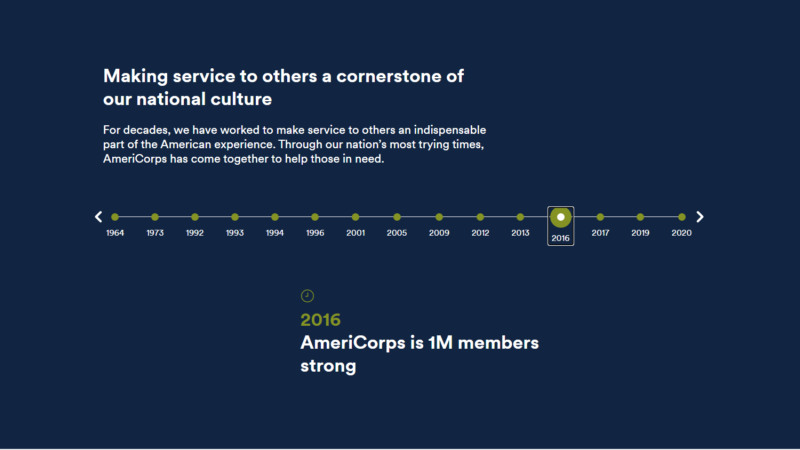 In 1964, as part of his domestic “Great Society” campaign, President Lyndon B. Johnson created the Volunteers in Service to America (VISTA) program. This was the first federally regulated program designed to send workers all over the U.S to serve in support of Johnson’s War on Poverty. In 1992, the National Civilian Community Corps (NCCC) was created to help communities recover from disaster, but it wasn’t until next year that AmeriCorps, known at that time as the Corporation for National and Community Service (CNCS), was formed under President Clinton. In 2012, the Federal Emergency Management Fund, or FEMA, was created as a branch of the NCCC to better aid in disaster zones, and five years ago, AmeriCorps officially hit 1 million members. Every year, people join for short- or long-term service stints all over the United States, serving in a variety of capacities and communities, putting their skills to work in the name of service to others.

I first learned about service terms in college. I attended a Jesuit institution, Seattle University, and was drawn to their commitment to educating the student body using cura personalis, or care for the whole person. A major way this was integrated into my education was to constantly be thinking about the intersections of my own identity and the identity of those affected by a particular justice issue. This played out in a previous position serving as a summer VISTA with United Way of King County when my site partner and I realized many of the meals we were handing out to and low-income children, and those impacted by COVID-19, were not culturally relevant. King County is filled with a wide range of immigrant communities and the meals were required to have milk cartons, something many of the kids did not want or could not digest. If the program did not have such broad state and federal guidelines about what the meals needed to include (sunbutter and jelly sandwiches) and had been more specific to the city of Seattle by serving bariis iskukaris (a staple Somali dish), for example, it may have encouraged more children to come and get a meal in the neighborhoods we were serving.

Many of my friends came from Catholic high schools and had long desired to serve with Jesuit Volunteer Corps (JVC) after graduation, while one of my public affairs professors had served in NCCC after his college career and shared how life-changing the experience was for him. When considering my own service goals, I wanted to ensure that I was applying the same lessons I was learning in school and living out the same mission I was drawn to. I began applying to different positions hoping to find a good fit in my field. Having graduated with a bachelor’s degree in Political Science, Non-Profit and Public Administration, and Women, Gender & Sexuality Studies, finding the Women’s Foundation of Montana was an incredible opportunity and felt like it fit exactly into the center of everything I had been studying for the last four years. The Women’s Foundation of Montana, a program of the Montana Community Foundation, has hosted AmeriCorps VISTAs since 2015. As the 2021/2022 VISTA, I am supporting the mission of WFM to advance women’s economic independence and create a brighter future for girls by drawing continued awareness to the work of WFM and by conducting interviews and outreach within the Powerhouse community to ensure that Powerhouse is providing the necessary connections and resources to help women all over our great state.